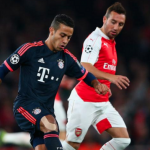 Olivier Giroud’s last four goals in all competitions have been as a substitute.

Theo Walcott is the eighth player to play 50 Champions League games for Arsenal.

Bayern Munich have won only one of their last six away games in the Champions League.

Bayern suffer their biggest group stage loss in the CL since 2 October 2012 vs BATE (3-1).