Arsenal progressed to the last 16 of the Champions League with a 2-0 victory over Borussia Dortmund thanks to a first goal for Yaya Sanogo and a lovely finish from Alexis Sanchez. 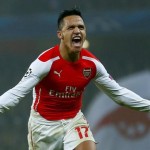 Sanogo pounced to slot home his first in Arsenal colours after just two minutes before Sanchez curled in a beauty from the edge of the box in the second half to round things off.

The result means that Arsenal progress to the knockout stages and still have a chance to top the group going into the final round of matches.

Despite missing key players in the form of Danny Welbeck, Jack Wilshere and Olivier Giroud, Arsenal dictated from the outset and enjoyed the perfect start when Sanogo latched onto Santi Cazorla’s pass to slide the ball under Roman Weidenfeller.

Sanogo could have a second minutes later but took one touch too many having beaten the offside trap and allowed the defence to get back and block his shot.

The home side were rarely troubled in defence and when Sanchez curled in a beautiful second, Arsenal banished memories of their collapse against Anderlecht and closed down the match.