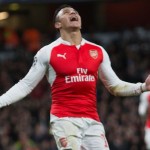 21’ – MISS! A dangerous cross is whipped from Monreal towards Giroud who tries an acrobatic volley but completely misses the ball. His team mate Campbell may have got in his way there.

29’ – GOAL! Arsenal 1-0 Dinamo Zagreb. The Gunners have the lead courtesy of a header from Ozil to finish a wonderful team move.

33’ – GOAL! Arsenal 2-0 Dinamo Zagreb. Sanchez doubles the Gunners’ advantage! The visitors fail to clear their lines, Monreal wins the ball back for his side, bursts into the penalty area and squares it to his team mate who is left with time and space to tap the ball into the back of the net.

39’ – SAVE! Ozil skips past a couple of challenges and fires a shot at goal from a tight angle but Eduardo saves with his feet to deny him a second goal of the evening.

48’ – SAVE! Cazorla goes close to grabbing a third for Arsenal as he fires a shot from the edge of the penalty area but Eduardo makes another save to deny him a first Champions League goal.

69’ – GOAL! Arsenal 3-0 Dinamo Zagreb. Sanchez scores his second of the evening – and his ninth of the season – as he times his run superbly to latch onto a through pass from Campbell and slides the ball into the net.

70’ – POST! Cech is still awake – he makes a save to deny Zagreb from a deflected effort and Rog then strikes the post from the rebound. Arsenal’s clean sheet is still intact.

79’ – PENALTY APPEAL! Sanchez is brought down by Eduardo when through on goal but the referee is having none of it and waves play on! The Chilean is furious – it looked like a foul on replay.