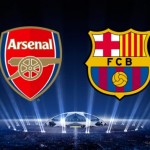 Such is the cost of finishing second in your Champions League group. Having performed heroics against Bayern Munich in October to overcome their woeful start to their European journey Arsenal now have to do it all over again against holders Barcelona. Twice.

Where Luis Enrique’s side rank among the greats of European club football may be a question for the history books but Barcelona set out on their quest to become the first back-to-back winners of the continent’s premier trophy since AC Milan 26 years ago as favourites.

In theory an Arsenal side that has struggled to find its best football since Christmas ought to pose little concern for the La Liga leaders but the gulf between the two sides was perhaps even greater on the last occasion they met at the Emirates in 2011. On that occasion Arsene Wenger’s side stunned Europe with a 2-1 victory that ranks among the Emirates greatest moments.

Overcoming Barcelona over two legs remains a challenge for Arsenal, who historically have matched their opposition at home but been torn apart at the Nou Camp. But a repeat of the upset of five years ago could be a major boon to the Gunners ahead of a challenging run of fixtures.