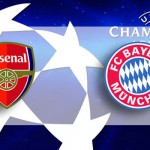 It’s one of the biggest clashes of the group stage so far, Arsene Wenger’s men have been awful in the Champions League this term but are in red hot form right now as they come up against a Bayern side who have won every single match of the season so far.