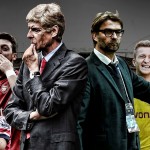 Arsenal ended a near decade long wait for silverware last season with an FA Cup triumph, but the optimism that instilled has faded quickly. Consecutive league defeats to Swansea City and Manchester United have left Arsenal in eighth place in the Premier League. They also lost early in the League Cup and recently threw away a 3-0 home lead in the Champions League against Anderlecht to draw 3-3.

Wenger has been heavily criticised for his tactics by the likes of former midfielder Paul Merson, but he responded to the latest attack by majority shareholder Alisher Usmanov by insisting he has not lost the dressing room. If Wenger fails to get it right for the rest of a campaign that threatens to unravel, he could be replaced by the man in the opposite technical area: Juergen Klopp, a figure who has not hidden his desire to work in the Premier League. It is not far-fetched to consider Klopp as the favourite to replace Wenger if the cracks continue to widen.

Klopp has long been touted as a manager who would be a perfect fit for the English game, his team having impressed with a 2-1 win in London during last season’s group stages.

Arsenal should qualify for the knockout rounds of the Champions League, but defeat by Dortmund could leave them vulnerable. Arsenal’s lack of defensive stability has been held up as the team’s main failing of the season so far, but Usmanov believes all departments need strengthening.