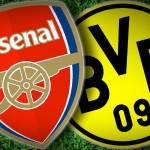 Arsenal will be without England midfielder Jack Wilshere, who is set to see a specialist because of an ankle injury, for Wednesday night’s Champions League clash against Borussia Dortmund. Forward Theo Walcott (groin) also misses out along with goalkeeper Wojciech Szczesny who injured his hip during Saturday’s Premier League defeat to Manchester United, but striker Danny Welbeck (knee) is expected to be available and defender Laurent Koscielny is in contention again following an Achilles problem. Striker Olivier Giroud, fit again from three months out with a broken leg, was not registered for European competition. Mesut Ozil (knee), Mathieu Debuchy (ankle), goalkeeper David Ospina (thigh) and Abou Diaby (calf) are all still unavailable.

In the Dortmund camp, Klopp must do without Marco Reus for around two months after the midfielder suffered ankle ligament damage in Saturday’s 2-2 draw at SC Paderborn.

Robin van Persie : I Am Committed To Arsenal. I Am The Captain!