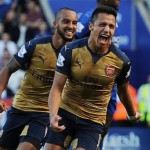 The visitors also have a player suspended as Luka Milivojevic is still serving a ban from last season, while Andreas Bouchalakis misses out with a thigh injury and Giannis Maniatis is still working on regaining match fitness following a lengthy absence with a knee problem. Manuel da Costa will need a late fitness test after picking up a calf injury, while Alejandro Dominguez is working to overcome a thigh strain. Petr Cech Ready To Bounce Back After Disappointing Arsenal Debut