Athletic Bilbao failed to mark their Champions League return with a victory when they were held to a 0-0 draw at home to Shakhtar Donetsk in their Group H opener on Wednesday. 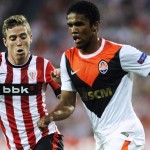 The contest at Bilbao’s impressive new San Mames stadium was evenly-matched, with both sides creating plenty of chances and the home side perhaps narrowly having the upper hand.

Bilbao finished fourth in La Liga last season and are making only their second appearance in the Champions League group stage and their first since the 1998-99 campaign.

The club, coached by their former striker Ernesto Valverde, manage to compete at the highest level even though they only use players of Basque origin.

Group H also includes Porto and BATE Borisov and the Portuguese side got their campaign off to a spectacular start when they thrashed the Belarussians 6-0 on Tuesday.