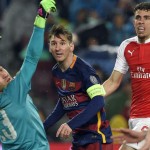 10′ – ARSENAL CHANCE! An Arsenal counter sees Ozil use the runners to create the space to take aim and rifle a 25-yard drive just past Ter Stegen’s right-hand post.

17′ – BARCELONA CHANCE! Neymar clips a sensational pass over the top of the Arsenal defence for Messi who kills it dead before seeing his strike brilliantly tipped over the bar by Ospina.

18′ – GOAL! BARCELONA 1-0 ARSENAL. Arsenal give the ball away cheaply, allowing Suarez to pick out Neymar who coolly fires a low shot past Ospina at his near post. Too easy. (Barca lead 3-0 on aggregate).

34′ – ARSENAL PENALTY APPEAL! Iwobi races into the left side of the Barca area on the break and goes down under an accidental challenge from Mascherano. The Argentine appeared to clip the youngster’s heel. The referee waves it away. It’s a tough call for the visitors. It looked like a spot kick.

40′ – ARSENAL CHANCE! A big chance goes begging for the Gunners. Bellerin motors into space on the right and clips a sumptuous cross into the middle for Sanchez who guides a free header wide of the far post. He should have scored.

51′ – GOAL! BARCELONA 1-1 ARSENAL. The Gunners are level on the night. A great move down the right sees Sanchez cut it back to Mohamed Elneny who fires a stunning 20-yard strike into the top corner (Barca lead 3-1 on aggregate).

65′ – GOAL! BARCELONA 2-1 ARSENAL. Barcelona regain the lead and it’s that man Suarez. The Uruguayan volleys a stunning finish into the top corner from Alves’s cross, despite the fact it looked like it came off his shin (Barca lead 4-1 on aggregate).

80′ – ARSENAL CHANCE! Sanchez sees a curling free kick palmed back into play by Ter Stegen. The keeper then makes another stop to deny Giroud on the rebound.