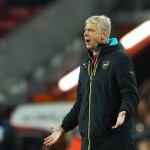 TALKING POINT: Goodison is make or break for Arsenal – and Wenger

Despite Wenger’s pre-match insistence that Arsenal had to believe they could produce something against the odds, the Frenchman’s team selection suggested he knew they were all-but out and already had one eye on Saturday’s league match at Everton.

The Gunners were never likely to overturn a 2-0 first-leg deficit against a side who could yet be the first to retain the Champions League in its current format.

Instead, Wenger brought in Iwobi and left the likes of Francis Coquelin, Olivier Giroud and Theo Walcott on the bench.

To be fair, the players selected gave a Barca side playing well within their comfort zone a few scares and Wenger will hope to take some positives from the showing into the final furlong of the season.

It’s make or break time for the Gunners now. They have won just once in their last eight matches in all competitions and must stop that rot at Goodison Park on Saturday to save a campaign that has imploded over the past five weeks.

Leaders Leicester are 11 points clear of them albeit having played a game more, but if the Gunners were to lose a tricky clash with the Toffees in the early lunchtime kick off it would surely be curtains once again for a title bid that had looked to have promised so much. And if that happens the calls for Wenger to step down will only intensify.