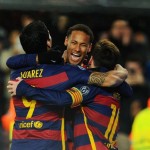 Barcelona took up where they left off in El Clasico, qualifying top of Group E after a 6-1 hammering of AS Roma.

A brace from Luis Suarez and a sublime Lionel Messi chip gave Barca a 3-0 half time lead.

And further second half goals from Gerard Pique, Adriano and Messi again completed the rout before a late Edin Dzeko consolation.

The result means that Barcelona finish top of Group E with a game still to spare with Roma second from Bayer Leverkusen on goal difference as the race for the runners-up spot goes to the final game.