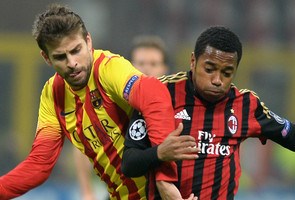 Barcelona have played 11 through balls in the Champions League this season, more than any other side.

Barcelona played 809 passes in the reverse fixture two weeks ago, compared to just 301 from the hosts.

Lionel Messi has scored four of Barcelona’s six goals so far this season.

Barcelona’s total of six goals from their opening three games is their lowest haul at this stage since scoring three in 2009-10.

AC Milan’s total of four goals from three games is one more than they had at this stage last season.

Cesc Fabregas has gone 14 games without recording an assist in the Champions League.