Bayern Munich blew Olympiacos away in the first 20 minutes to qualify for the Champions League knockout stages with a 4-0 win at the Allianz Arena. 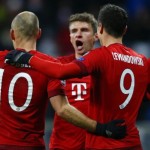 Pep Guardiola sent out a remarkably attacking Bayern line-up for the game, knowing that victory would seal top spot in Group F for his side. And his players didn’t let him down, exploding out of the blocks with a display that would have tested even the best defence in the world.

The outstanding Douglas Costa opened the scoring when Olympiacos goalkeeper Roberto could only parry a shot from Jerome Boateng, but there was still plenty to do for the Brazilian, who finished in style into the far corner.

Robert Lewandowski continued his impressive scoring streak on 16 minutes, making it 20 goals in 20 games for his club this season, before Thomas Muller tapped in a third to complete a breath-taking start from the German Champions.

A slight injury concern for Arjen Robben was the only worry to come from the first half for the hosts, but Olympiacos were much improved after the break and forced an error when Holger Badstuber hauled down Brown Ideye as the last defender. It wasn’t much of a foul, but it did deny the striker a one-on-one so the red card was hardly a surprise.

The visitors, however, were unable to take advantage and the ten men of Bayern cruised to a victory that was wrapped up when young winger Kingsley Coman headed home.

It could have been a lot worse for the Greek visitors, who will now turn their attention towards a crunch clash with Arsenal to decide which of the two will progress to the last-16 along with Bayern. Man Utd Wrapping Up The Signing Of Toni Kroos