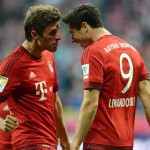 10′ – GOAL! BAYERN 1-0 ARSENAL. Lewandowski opens the scoring with the simplest of headers as Arsenal’s offside trap is broken by Thiago’s delicious cross from the left.

12′ – GOAL DISALLOWED! Arsenal think they are level but the referee halts their celebrations. Monreal overlaps on the left and smashes in a cross that Ozil diverts home with his elbow. The Arsenal man is rightly booked.

29′ – GOAL! BAYERN 2-0 ARSENAL. The hosts double their lead! Lahm’s cross is miss-hit by Coman but Muller is on hand to squeeze a deflected effort beyond Cech at his near post.

44′ – GOAL! BAYERN 3-0 ARSENAL. Curtains for Arsenal and you have to say Bayern deserve such a lead. Alaba wins a tussle with two Arsenal players in the midfield and finishes off a wonderful solo effort with a curling shot into the top corner from 25 yards.

55′ – GOAL! BAYERN 4-0 ARSENAL. An instant impact from Robben! Bayern cut the Gunners to ribbons down the left with Alaba racing onto Costa’s flick and cutting it back for the Dutchman to fire high into the net from close range.

69′ – GOAL! BAYERN 4-1 ARSENAL. The Gunners have one back. Sanchez clips a delightful ball into the middle for Giroud who chests it down before acrobatically steering it past Muller.

89′ – GOAL! BAYERN 5-1 ARSENAL. Muller puts the seal on Bayern’s triumph. The German grabs his second of the match as he breaks free and clinically fires past Cech at his near post.