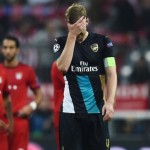 Guardiola’s tenure was always going to be judged by his success in Europe given Bayern’s complete monopoly of the domestic scene.

So far he has underachieved on the continent, but on this evidence this season could well be the one where they lift the Champions League trophy for a sixth time.

Barcelona and Real Madrid will pose their usual threat but the style and swagger of this Bayern team is a sight to behold. When they are on song they look unstoppable and score goals from all departments.

Arsenal had defensive issues coming into this match but nothing can be taken away from the Bavarians who must now overcome their habit of dipping in the second half of a campaign to achieve their ultimate goal.