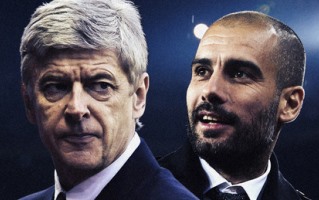 Pep Guardiola: “When I analyse Arsenal and the first game (last month), we saw the quality of (Santi) Cazorla, we saw what happened until the (early) penalty (Mesut) Ozil missed, what happened in the first nine minutes they were the nine minutes in this season when the opponent was better against us. They remain a good club, a good team. They can create two or three really great chances in two or three minutes. If you play in a really good team like Arsenal and are 2-0 down, anything is possible. People think ‘2-0 you don’t have a chance in Munich’, but that’s the main problem for us. ”

Arsene Wenger: “It is a possible task, that is the most important thing. My team has quality and ambition. History is important in our belief. We know we can do it, because we have already done it (before). The way to win is to produce a top-level performance and turn up with quality and belief. The statistics are against us, but we have won 5-1 at Inter, we have won everywhere in Europe. We have had a few good nights in Europe but it would be absolutely great (if we won tomorrow).”