Arsenal were subjected to a torrid night in Germany as Pierre-Emerick Aubameyang helped Borussia Dortmund to a comfortable 2-0 win in Champions League Group D. 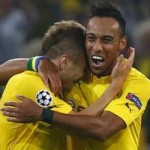 In a match that Arsene Wenger will quickly want to forget, Arsenal departed Signal Iduna Park, a ground where they won 2-1 in last season’s group stage, bruised and battered after being given a serious runaround by the raw pace of the home side.

In truth, Arsenal were fortunate to escape conceding only two goals with Ciro Immobile running from the halfway line to slot the opener before half-time and the outstanding Aubameyang – who at times seemed to move as fast as Usain Bolt – rounding Wojciech Szczesny to slot home the second just after half-time.

Despite being thoroughly outclassed on the night, Arsenal did fashion some real chances with Danny Welbeck missing three obvious opportunities to give the visiting side some modicum of interest in a one-sided contest that was almost farcical such was the home team’s superiority.

Dortmund simply ran amok and totted up 24 shots with Arsenal managing only four. It was a miracle Juergen Klopp’s side declared on only two.