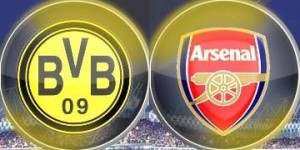 Hummels sustained a thigh injury in the 6-1 league win against Stuttgart but it was not discovered until a day later.

Greece international Sokratis Papastathopoulos, who scored a goal against Stuttgart last week, will most likely replace Hummels in the central defence.

Sebastian Kehl, Ilkay Gündo?an and ?ukasz Piszczek remain out but Marcel Schmelzer should be fit.

Jack Wilshere missed the Liverpool match because of an ankle problem which is understood to be unrelated to the long-term injury he has been battling against in recent seasons.

The combative 21-year-old will be assessed ahead of the squad’s departure for Germany on Tuesday afternoon, and could well stay in London to try to get him fully match fit in time for Sunday’s Premier League trip to Manchester United.

Defender Kieran Gibbs is also doubtful after limping off in the second half against Liverpool with a calf problem, while midfielder Mathieu Flamini is not yet expected back from his groin injury and Theo Walcott may also be available at the weekend as he steps up his recovery following minor abdominal surgery.