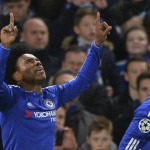 Chelsea showed glimpses of their best form as they booked their place in the last 16 of the Champions League as Group G winners after cruising to a 2-0 win over Porto at Stamford Bridge.

Both sides knew a win would take them through as group winners, but Porto rarely threatened on a night where Chelsea, who left Cesc Fabregas and Pedro out from the start, clicked into gear early on.

Diego Costa – now with only one goal in his last 11 games – looked more like the player that helped fire Chelsea to the Premier League title last season and played a key role in the opener, which came courtesy of an Ivan Marcano own goal, with Costa’s shot deflecting off the luckless defender and beyond the desperate efforts of Maicon to keep it out on the line.

Chelsea were well on top and made their dominance count early in the second half when the lively Willian latched onto Eden Hazard’s pass to thrash home a ferocious low shot that beat Iker Casillas at his near post.