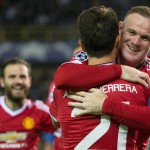 20’ – GOAL! Rooney has done it. He ends his goal drought! Wonderful finish too. Memphis does superbly to cut inside, fake the shot, and just thread the ball into Rooney’s path, who dinks it over the onrushing goalkeeper. Superb. Relief is palpable. 4-1 to United on aggregate now.

44’ – SUPERB SAVE! Huge chance for the hosts. Diaby breaks the offside trap, dubiously, looks to have rounded Romero, but the Argentine does brilliantly to spread himself and save twice, before defenders are back to clear. Brilliant goalkeeping.

49’ – GOAL! Rooney again! 2-0 to United on the night. Beautifully constructed. Herrera, who has done little all match, plays a delightful ball into the feet of the United skipper, who has the simple task of slotting home. Game, set and match.

57’ – GOAL! Rooney hat-trick! Incredible scenes. 6-1 on aggregate to the Red Devils. Great play from Mata to pick out Rooney, who waits for the ‘keeper to go down, and slots home. He is back.

63’ – GOAL! Schweinsteiger plays an absolutely sublime pass into the path of Herrera, who is clean through, and the Spaniard makes no mistake and slots home.

66’ – WOODWORK! Great strike from substitute Vanaken, who smashes the ball at goal from distance, beats Romero all ends up, but sees his strike come out off the crossbar.

82’ – MISSED PENALTY! Hernandez misses from the spot! He slips as he hits it. Reminiscent of a famous night in Moscow!