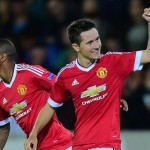 Wayne Rooney has scored his first European hat-trick since his Man United debut against Fenerbahce in 2004.

Rooney’s goal drought lasted a total of 878 minutes in all competitions.

Memphis Depay has had a hand in all four of Man United’s goals in this CL qualifying campaign (2 goals, 2 assists). Hiddink Backing Memphis Depay To Prove His Worth At Man Utd