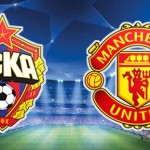 United have collected three points from their opening two games in Group B, and are exciting to watch because you never know quite what you are going to get.

A fortnight after being flogged 3-0 by Arsenal, they went to Everton to complete an impressive 3-0 success.

Second top of the Premier League, they are in good health heading for the Russian capital. But Moscow is traditionally a tough asking place.

United, who won their third crown when they beat Chelsea on penalties at the Luzhniki Stadium in May 2008, returned to the Russian capital on Oct. 21, 2009 and beat CSKA 1-0 with a late goal by Antonio Valencia.

The Red Devils will be looking to repeat that victory at a different venue, the Arena Khimki, as the Luzhniki is under reconstruction for the 2018 World Cup finals.