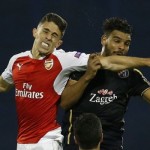 Theo Walcott has reached 10 goals for Arsenal in the Champions League, one of only six players to have done so.

Olivier Giroud is the fourth Frenchman to be sent off for Arsenal in the CL, after Grimandi, Sagna and Vieira.

Arsenal have kept just one clean sheet in their last 11 away Group Stage games. Arsene Wenger has taken charge of 169 games in the Champions League, more than any other current manager. Only Alex Ferguson boasts more games (190).

Dinamo had lost their last six meetings with English opposition, conceding 16 goals in the process.