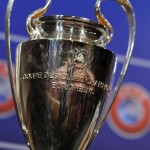 Atletico Madrid were handed a chance to avenge last season’s Champions League final defeat by city rivals and record 10-times winners Real after the two sides were drawn together in the last eight on Friday.

Paris St Germain and Barcelona were paired together having met in the group stage, with the French side winning in Paris and the Catalans coming out on top in Spain.

Porto will face 2013 champions Bayern Munich and Juventus take on Monaco in the other ties.

The fixtures will be played on April 14/15 and April 21/22, with PSG, Atletico, Porto and Juventus playing the first legs at home.

Arsenal Urged To Be More Ruthless In The Next Transfer Market