Cristiano Ronaldo kept Lionel Messi’s Champions League goalscoring record in his sights, scoring as Real Madrid beat Basel 1-0 to qualify for the knockout phase as winners of Group B. 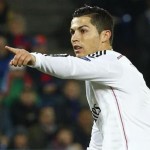 Messi scored a hat-trick last night to move to 74 goals and Ronaldo’s goal tonight takes him to 71, level in second place with fellow Madrid legend Raul.

With Liverpool drawing against Ludogorets, the Reds and Basel will now go head to head for the second qualification spot, and it’s a match the Reds must win as they trail the Swiss champions by two points.

It was Ronaldo’s tap-in, set up by the wonderful work of Karim Benzema, that lit up an uneventful first half in Basel with the reigning champions cruising in third gear safe in the knowledge they were already through.

Basel came back into the game in the second half but lacked any cutting edge, despite the lively Breel Embolo drawing a fine save from Keylor Navas.

Madrid had chances to finish off their opponents, Gareth Bale hitting the bar and Ronaldo coming inches from finishing off a fine team move, but in the end the one goal was enough to secure their 15th straight win in all competitions.