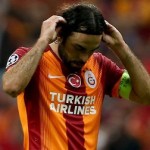 A stoppage time strike from Burak Yilmaz earned Galatasaray a 1-1 draw with Anderlecht in their opening Group D Champions League fixture on Tuesday after Dennis Praet had put the visitors on course for victory.

Praet found the opening in the 52nd minute, gathering a cross on the left, passing two players along the edge of the penalty area and firing in a shot to Galatasaray keeper Fernando Muslera’s right which flew in off the post.

Into injury time, Galatasaray’s Aurelien Chedjou broke through the defences on the left of the area and found Burak who shot past Anderlecht keeper Davy Roef from a few metres to the relief of the home side.