Aaron Ramsey scored his spectacular effort just before the half-hour mark, lashing in from 30 yards out with sublime precision. 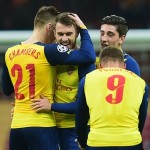 He was adding to Lukas Podolski’s third-minute opener, scored past Sinan Bolat at the near post, and his own casual effort on 11 minutes, sidefooting across the face of goal and into the net.

Ramsey and Alex Oxlade-Chamberlain had the run of the midfield, creating and controlling play throughout. But Ramsey was withdrawn at half-time, complaining of a tight hamstring, and the second half was a much more subdued affair.

Wesley Sneijder grabbed a goal back for the hosts, a gloriously powerful free-kick that blasted through the five-man wall, but it was far too little too late.

And Podolski made that point abundantly clear as he restored the three-goal cushion with a nonchalant low shot in the final kick of the game.

Arsenal qualify second from the group as leaders Dortmund secured a point against Anderlecht.