Carlos Tevez scored his first Champions League goals for more than five years to give Juventus a 2-0 win over stubborn debutants Malmo in Group A on Tuesday. 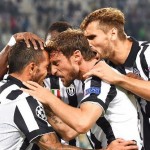 The feisty Argentine flicked the ball to Kwado Asamoah in the penalty area and then ran on to the Ghanaian’s back-heeled pass to slot the ball past Robin Olsen in the 59th minute.

He then secured the points by curling in a free kick from the edge of the area in the 90th minute of the Group A match.

Tevez’s first goal bailed out Juventus who appeared to have run out of ideas as they battled a well-organised Malmo defence.

The visitors, who reached the 1979 European Cup final but had never qualified for the Champions League group stage, had the best first-half chance when Magnus Eriksson’s close-range effort at the far post was stopped by keeper Gianluigi Buffon’s feet.