Chelsea moved to the top of Champions League Group G with a comfortable 4-0 success away to 10-man Maccabi Tel-Aviv. 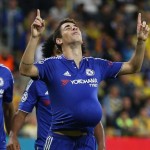 The Blues took the lead on 20 minutes when Gary Cahill fired in a poacher’s goal after his initial header had been brilliantly tipped onto the post by Predrag Rajkovic.

It was no more than Jose Mourinho’s side deserved as they overcame a slow start to dominate the proceedings, with their hopes further enhanced by the straight red card shown to their former defender, Tal Ben Haim just before the interval for a wild kick at Diego Costa.

Despite that loss, Maccabi almost levelled after the break with Eli Dasa and Eran Zahavi going close before Willian sealed victory with a delicious free kick just seconds after John Terry was stretchered off following an awkward fall.

Chelsea must now avoid defeat at home to Porto on matchday six to ensure they get out of the group after Dynamo Kiev’s surprise win in Portugal prevented the West Londoners from qualifying for the last 16 with a game to spare.