Second-half strikes from Fernando Llorente and Carlos Tevez gave Juventus a gritty 2-0 win over Malmo in their Champions League clash on Tuesday, the Italian side’s first away victory in the group stage for two years. 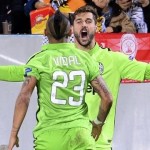 Llorente broke the deadlock four minutes into the second half, latching on to Claudio Marchisio’s through ball and charging from the halfway line before rounding Robin Olsen and slotting the ball home.

Tevez netted a late second in the 88th minute to complete their first Champions League away win since they beat Shakhtar Donetsk 1-0 in December 2012.

Malmo had their fair share of chances but failed to find the net and cannot now qualify for the knockout stages.

The win moves Juventus into second place in Group A on nine points, three behind leaders Atletico Madrid, who hammered Olympiakos Piraeus 4-0.

The top two meet in Turin in their final group game on Dec. 9, with Juventus needing a point to ensure qualification.