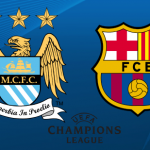 Manchester City are without key midfielder Yaya Toure for the first leg of their Champions League last-16 tie against Barcelona at the Etihad Stadium on Tuesday through suspension. Toure is serving the final match of a three-game ban for his sending off against CSKA Moscow in November but fellow midfielder James Milner has overcome a knee problem. New striker Wilfried Bony could make his full City debut having replaced Stevan Jovetic in the squad for the competition. Fellow forwards Sergio Aguero and Edin Dzeko are one booking away from a ban, as are defenders Pablo Zabaleta and Gael Clichy.

Barcelona will be without defensive duo Thomas Vermaelen (hamstring) and Douglas (hamstring) for the clash in Manchester. Luis Suarez is expected to start, playing a match in England for the first time since leaving Liverpool last year.