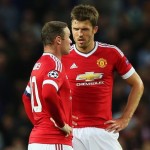 8′ – GOAL! Manchester United 0-1 Club Brugge. Vazquez’s low free-kick into the area deflects off first the wall and then Carrick and past Romero and into the United net.

26′ – CHANCE! Two chances in a minute for Rooney – his scissor kick is cleared off the post by Vazquez, then from the second corner, he cannot angle a on goal.

36′ – CHANCE! Rooney finds Memphis down the left channel but the Dutchman tries to find Januzaj rather than round the goalkeeper in the Brugge area and the chance is lost.

42′ – GOAL! Manchester United 2-1 Club Brugge. Memphis cuts in from the left from Blind’s pass and beats Cools before slamming the ball past Bruzzese at the far post

53′ – CHANCE! Memphis wastes a golden chance of a hat-trick, after being set up by a Rooney backheel following Shaw’s break down the right.

78′ – RED CARD! A second yellow card for Mechele for a cheap foul on Hernandez down the right.

90+3′ – GOAL! Manchester United 3-1 Club Brugge. Memphis cuts inside and crosses to the far post for Fellaini to head home!