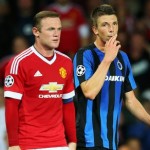 Wayne Rooney has now gone nine games without a goal for Manchester United.

United have never lost a Champions League or European Cup qualifier over two legs- their sole reverse in 18 qualifying games in the competitions was a 1-0 defeat at Zalaegerszeg in the 2002/03 third qualifying round.