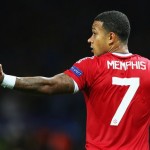 MAN OF THE MATCH

Memphis (Manchester United) The £25m summer signing from PSV Eindhoven showed some good moments on United’s pre-season tour of the United States, but looked on a different wavelength to Wayne Rooney. The partnership is still far from telepathic, but the 21-year-old knows now to take up a position in the hole and to the left and leave the centre to the United captain.

Cutting inside Memphis looks a real threat, as proved by his two goals against the Belgians tonight. Nine of the Dutchman’s 30 club goals since the start of last season have come from outside the penalty area – expect long-distance strikes to become a trademark at Old Trafford.