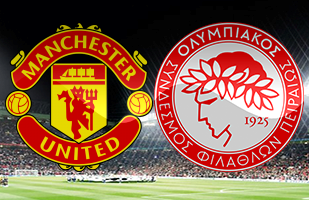 Manchester United manager David Moyes could shake up his team following Sunday’s defeat to Liverpool with Nani and Javier Hernandez training again after injuries.The United boss looks as if he will be without defenders Chris Smalling (hamstring) and Jonny Evans (calf), who both missed training on a wet Tuesday morning at the AON Training Complex in Carrington.

Olympiacos coach Michel has to choose between former Argentina forward Javier Saviola, who missed the first leg due to injury and who would make his 100th appearance in European club competition, and Paraguayan Nelson Valdez for the lone attacking role in place of Nigerian striker Michael Olaitan. Olaitan was kept in hospital for a week following his dramatic collapse during the Athens derby against Panathinaikos on March 2 due to viral myocarditis, but although he has no serious condition he is not yet ready for action. Defensive midfielder Ivan Marcano is also expected to be fit after being rested over the weekend.

Man Utd To Sign Cristiano Ronaldo As Free Agent In 2015