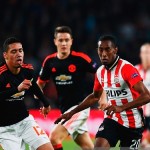 A similar pattern of play to the game in the Netherlands seems likely.

With that in mind the key battle will once again be between United’s creative midfielders and PSV’s defensive unit.

The Red Devils will hope to retain some of the incision they showed against Watford as they come up against a team which counter-attacked their way to victory when the two teams last met.