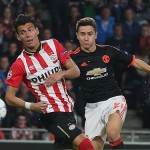 Memphis will be the one to watch from a United perspective. After a confidence-battering few weeks, he stepped up when called upon against Watford and provided a crucial goal. Having impressed on his return to Eindhoven, he will be eager to once again prove that he is ready to be at United.

Eindhoven’s main man in Memphis’ absence has been De Jong, who has 11 goals in 11 starts and one substitute appearance in the Eredivisie. Maxime Lestienne’s absence will be felt as creator-in-chief—he has four league and two Champions League assists to his name already this season.

Guardado will be important in this regard—the Mexican is averaging 2.7 key passes per game in the Eredivisie this season, so United will have to be aware of his ability to create chances.


Now We Have To Play For Our Lives! – Arsenal’s Hector Bellerin