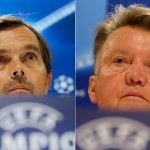 It is is a chance for Louis van Gaal to resume old hostilities—the former Ajax manager has had plenty of run-ins with his previous club’s rivals. An unpleasant welcome presumably awaits Hector Moreno—the PSV defender whose tackle broke Luke Shaw’s leg when the two sides met in Eindhoven in September.

Van Gaal did not blame the Mexico international for the incident, saying, per the Mirror, “It was a reckless tackle, but I don’t think Hector Moreno did it on purpose.”

That leg break cast an odd pall on the game, particularly United’s performance, as they fell to a 2-1 defeat in spite of dominating possession by a margin of 61.2 percent to 38.8 percent and taking 17 shots to PSV’s six.

If those figures are repeated at Old Trafford, then Phillip Cocu’s men will do well to emerge with another victory.

A draw would be a fine result for PSV, as it would keep United just one point ahead of them in the group. For United, with a tough trip to Wolfsburg on the horizon, a win would be crucial. It would mean qualification to the knockout stages of the tournament is assured, and put them in poll position to win the group. I Tried Everything To Bring Ronaldo Back To Man Utd – Evra