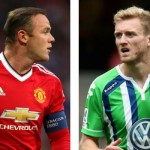 Manchester United’s Michael Carrick, Ander Herrera, Antonio Valencia and Marcos Rojo were all missing from the session at the Aon Training Complex in Carrington on Tuesday morning. Rojo has missed the last two games with a hamstring problem, but Carrick and Valencia started Saturday’s 3-0 win over Sunderland while Herrera was an unused substitute. Luke Shaw is out having broken his leg against PSSV Eindhoven.

Wolfsburg, who drew 1-1 with Hanover 96 on Saturday after being crushed 5-1 by Bayern Munich last week, are likely to be without midfielders Luiz Gustavo and Vieirinha. Brazil international Luiz Gustavo was taken off midway through their demolition at Bayern with a knee injury and coach Dieter Hecking says his chances of playing in Manchester “don’t look good”. Portuguese Vieirinha has returned to training after a three-week break caused by a thigh injury but the game at Old Trafford could come too soon for him.