Eden Hazard won and then missed a late penalty as Chelsea were held to a 1-1 draw in a breathless encounter with Maribor. 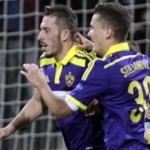 Jose Mourinho fielded a strong team against the side who crumbled to a 6-0 defeat at Stamford Bridge two weeks ago, with Petr Cech and Didier Drogba both starting.

Buoyed by a vociferous home support, Maribor were resolute throughout and the Slovenian side could have taken the lead in the first half when Marcos Tavares darted between John Terry and Nemanja Matic but passed to Luka Zahovic when he should have gone for goal himself.

But Maribor only had to wait five minutes into the second half before they took a shock lead, when Agim Ibraimi cut onto his left foot and bent a brilliant shot beyond the helpless Petr Cech from the corner of the penalty area.

With Chelsea on the ropes, Slovenian football’s top scorer Zahovic missed a golden chance, putting over the bar from six yards with Cech stranded.

That glaring miss gave renewed hope to Chelsea, who levelled through Matic after Terry had flicked on Cesc Fabregas’ corner.

Chelsea looked to have earned the chance to grind out the win when Hazard was tripped in the box, but the Belgian – Chelsea’s best player on the night – saw his casual penalty saved by the inspired Jasmin Handanovic as Maribor secured a famous result.