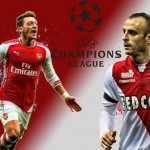 Arsenal were on the floor after losing 3-1 to Monaco last month but the Londoners have rebuilt confidence enough to believe they can overturn their Champions League deficit in Tuesday’s return match.

Since being beaten in the last-16 first leg at The Emirates, the Gunners have bounced back by knocking Manchester United out of the FA Cup and by overcoming West Ham United, Queens Park Rangers and Everton in the Premier League.