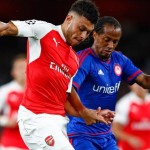 Arsenal have lost all three previous Champions League away games against Olympiakos, all of those have taken place on matchday six.

The Greek side are currently unbeaten in six home Champions League ties against English opposition; winning five of those games (D1).

Arsenal have failed to keep a clean sheet in 11 of their last 12 away games in the group stage of this competition.

The Gunners will progress ahead of their Greek opponents if they win this game by at least two goals; a 3-2 win would suffice because of their superior goal difference.

Arsenal have never failed to reach the knockout stages of the Champions League since the inception of the new format in 2003/04.

Olympiakos will reach the Last 16 so long as they avoid defeat; a 0-1 or 1-2 loss will also be enough for the Greek side.

Arsenal have conceded a competition-high three goals from corners whilst no side has scored more from a corner this season than Olympiakos (2) in the Champions League.

Arsenal could be without Alexis Sanchez, he has been directly involved in seven of Arsenal’s nine Champions League goals this season (three scored and four assists).

Felipe Pardo has been involved in three of the last four Champions League goals scored by Olympiakos (two scored and an assist); he scored in the reverse fixture too.