Olivier Giroud produced arguably his finest display in an Arsenal shirt as his hat-trick ensured the Gunners pulled off a great escape to progress to the last 16 of the Champions League on a famous night in Athens. 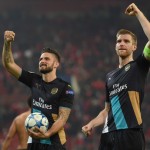 The French international has had critics throughout his career with Arsene Wenger’s side, but he stepped up to the plate in style with a 38-minute treble – his first for the club – to help clinch a 3-0 success at Olympiacos.

Arsenal had lost on their previous three visits to the Greek champions but knew they had to win by two clear goals, or by one if the scoreline was 3-2 or higher, to reach the knockout stage.

The task was made all the more difficult for the Londoners given the host of star names left behind on the treatment table, but they responded with a scintillating team display following a shaky opening, and were well worth their margin of victory.

It caps a remarkable turnaround for Wenger and co, who had left themselves with a mountain to climb after losing their first two matches in the group. With the talismanic Alexis Sanchez missing they needed someone to take on his mantle and Giroud responded with a haul that has now seen him net 10 times in his last 12 appearances.