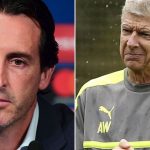 Unai Emery: I expect a tough game, a different contest to our game at the weekend, because Arsenal have a different formation and brand of football. The team look good to me, although we haven’t won our last two league matches.

I’ve assessed the whole squad, and they’ve looked me in the eye. It’s the same as it was on the first day. It’s about hard work, being determined and being optimistic — but, above all, hard work. We will see how [Thiago Silva] feels after training. There’s a chance he could be involved.

Arsene Wenger: I love to come to Paris. It’s my country, and Paris are a good test for us, a club that’s above everyone else in France. France always produce good teams and good players, so it’s exciting for us to come to the city and compare ourselves. We’ll play our own game and look to attack. PSG are very strong in midfield, and we’ll try to stop them feeding their forwards.

Koscielny’s alright. He had a big knock on his face, but he’s recovered well. For me, he’s one of the best defenders in the world and I hope he’ll prove it tomorrow.

Wilshere Insists Arsenal Have Nothing To Fear Against Bayern Munich