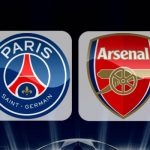 Arsenal begin their Champions League campaign this season with a difficult trip to PSG in Group A of the competition.

The Gunners have had a solid, if unspectacular, start to the Premier League season, picking up seven points from their first four games.

PSG have exactly the same points and goal difference after their opening four Ligue 1 games.

Given their recent dominance of the French league, it has not been a great start for new Spanish boss Unai Emery.