Real Madrid recorded a 19th successive win by beating Ludogorets Razgrad 4-0 in the Champions League at the Bernabeu. 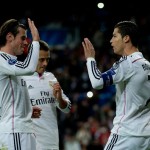 The Group B victory over the Bulgarian champions means Carlo Ancelotti’s side have surpassed Barcelona’s 2005-2006 Spanish record of 18 wins in a row.

Real Madrid go through to the last 16 as group winners and with a 100 per cent record of six wins from six matches.

The European champions were always comfortable after Ludogorets’ Marcelinho was sent off in the 20th minute for a handball on the goalline as he tried to keep out Raphael Varane’s header.

Cristiano Ronaldo converted the penalty, his 72nd Champions League goal in 109 appearances, before Gareth Bale doubled the lead seven minutes before the break.

Real were made to work hard by Ludogorets’ impressive goalkeeper Vladislav Stoyanov in the second half, but wrapped up the win through a rare strike from Alvaro Arbeloa and a first senior goal for 20-year-old academy graduate Alvaro Medran.

Ludogorets finish bottom of the group, but coach Georgi Dermendzhiev will be pleased by a first Champions League campaign that saw a home win over Basel and a home point against Liverpool.