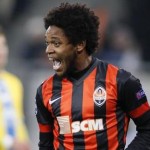 Shakhtar Donetsk’s Luiz Adriano took his tally against BATE Borisov to eight goals in two games as the Ukrainian side took a giant stride towards the Champions League’s last 16 by crushing the Group H minnows 5-0 at the Lviv Arena.

The result was largely expected after the Ukrainian champions humiliated BATE 7-0 away in Minsk, with Brazilian striker Luiz Adriano scoring a hat-trick after netting five in their previous encounter.

Shakhtar stay second in Group H with eight points from four games, two behind leaders Porto who qualified for the knockout stages on Wednesday. BATE are third with three points, two clear of bottom side Athletic Bilbao who have one.