Manchester United bowed out of the Champions League following a 3-2 defeat at Wolfsburg on an action-packed night in Group B. 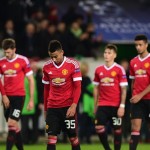 United still would have progressed if PSV failed to get a result against CSKA Moscow, but the Dutch side staged a late fightback to win 2-1 and secure a spot in the knockout round.

Wolfsburg took the lead on the half-hour with a marvellous team goal and display of pinpoint passing, finished off by Vieirinha.

United thought they were heading in at the break level after Juan Mata strained to connect with Jesse Lingard’s ball in, but the offside flag ruled it out.

Then they thought they’d done enough to progress to the next stage of the Champions League when Josuha Guilavogui deflected Marouane Fellaini’s effort into his own net.

But then two minutes later Naldo scored his second of the night, sending United out – and into the Europa League.