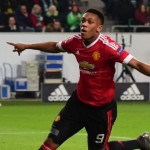 10′ GOAL! Well, excellently taken there by Anthony Martial, using his pace to skip through a rather flat back line and on to a through-ball from Mata.

13′ GOAL! Not a bad response! Great ball in from Rodriguez, swung in from a free kick, and it bounces through the box to reach the shin of Naldo.

29′ GOAL! What a FANTASTIC goal. Gorgeous passing. That switch to the right flank, Draxler played a beautiful one-two with Kruse, and then opted to square it to Vieirinha, so unselfishly, who finished it off.

45′ NO GOAL! Cameron Borthwick-Jackson worked so hard to win the ball there for Lingard, enabling Mata to slot home, but the flag eventually goes up and it’s disallowed.

82′ GOAL! AN OWN GOAL! Guilavogui gets a touch after Fellaini’s header in from a corner swung in beautifully by Blind.

84′ GOAL! Can’t even keep up with this, my poor little fingers are confused. Up the other end and it’s another corner, powered in by Naldo and it pinballs around off a trio of United defenders and into the net.